Most Electric Shocks Happen In The Workplace

Do rubber shoes protect you from electric shock?

Most Electric Shocks Happen In The Workplace

Where do most electric shock incidents occur?

A report issued by the Australian Institute of Health And Welfare reveals the most common place for people to experience electric shock incidents is the workplace.

This table shows the breakdown of where the incidents occurred. 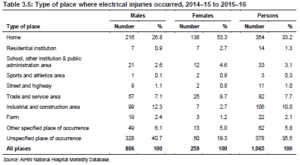 “In the 2-year period, almost 1,100 hospitalised cases were identified as having an electrical injury involving exposure to an electric current or lightning. Close to half (46%) of those were aged 25–44 (487 cases), with similar proportions reported for both males (46%) and females (44%).

Overall, electrical injuries accounted for 2,425 admitted patient care days for the 2-year period, and patients stayed an average of 2 days. Of hospitalised cases with any electrical injury, 8 (about 1%) died before being discharged, including 2 victims of lightning.”

Testing and tagging of electric appliances is recognised as an effective way to reduce the risk of electric shock incidents in the workplace. more info

Would you know what to do if a fellow worker received an electric shock?  more info