We found this article and thought it was both interesting and amusing.

Here’s a strange — but absolutely true — story about my grandfather, and how he became known for his “lucky leg.”

It happened one night in March 1955, when my grandfather was trying to catch a train at Park Street Station. He reached the platform as the train pulled away, then stumbled and fell onto the tracks and touched the third rail.

But thanks to his wooden leg, he wasn’t electrocuted. 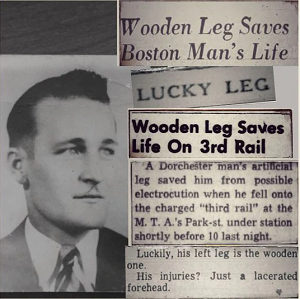 The crazy story of his “lucky leg” appeared in newspapers across the country, from California to Texas to Alaska to Florida. It also became an integral part of our family lore.

Up until that point, not many people knew that my grandfather only had one leg. When he was about 7 years old, he lived in a mining town in Pennsylvania that had a railway, and one of the cars rolled over his foot. He wasn’t supposed to playing near the railway and didn’t tell anyone about it until it became so infected they had to amputate the lower part of his leg.

My grandfather had been getting around on one foot since he was a little boy, and he got pretty good at it. My aunt, Helen Wisnaskas, said he always walked fine, and no one could tell he used a prosthetic limb. “To look at him, you’d never know,” she said. The leg was made out of wood and leather. “He kept his socks up with thumb tacks,” she said.

My grandfather later moved to Boston, married my grandmother, and in 1942 they moved into a three-room apartment on Staniford Street in the West End. Back then, the West End was a bustling neighbourhood filled with families of all different races and ethnicities. The narrow streets were lined with five- and three-story brick row houses and storefronts that housed tailor shops, restaurants, cobblers, drugstores, bakeries, and delis. My grandparents lived there for the next 12 years and had seven children who were all were baptized nearby, at Saint Joseph’s Church.

Then one day, my grandmother picked up a newspaper and read an unsettling article: The West End was going to be torn down. My grandparents realized they didn’t have any choice but to relocate. The Boston Housing Authority sent them to Dorchester, and on Aug. 31, 1954, they moved into an apartment at Columbia Point, a new housing project that had been built next to the city dump and sewage pumping station. They were among the first residents to move in, and unlike the West End, there were no stores, trolleys, playgrounds, schools, or churches for miles.

That was the night that my grandfather fell onto the tracks. It was a Wednesday night, and I’m not sure what he was doing downtown. Maybe he was visiting friends. Maybe he just wanted to be back in the heart of the city, or see the old neighbourhood.

It was just before 10 p.m. when he started running toward the train that would get him back to his new home at Columbia Point. The Globe reported at the time that he “teetered on the platform lip, losing his balance” and “tumbled into the track pit seconds after a rapid transit train rumbled out of the station, his wooden limb coming to rest on the electrified rail.”

Two MTA workers — Louis King of 718 Commonwealth Ave. in the Back Bay and Eben F. Holstridge of 107 Elm St., Somerville — rescued my grandfather. The Globe reported that when they heard him yell, they “immediately shut off the power and pulled him to safety.”

“A four-minute delay resulted when power was turned off,” the Globe noted.

My aunt said the people at the T station thought my grandfather was a goner. “He scared the heart out of the workmen. They thought he was fried,” she said. “He was very lucky. It just wasn’t his time.”

The Origins Of The Electric Drill